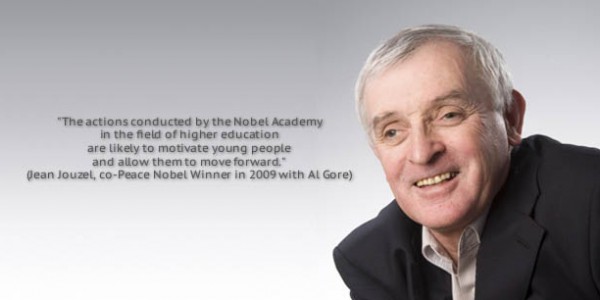 Jean Jouzel, co-Peace Nobel Prize winner in 2009 with Al Gore, is a French glaciologist and climatologist. He is an authority on major climatic shifts based on his analysis of Antarctic and Greenland ice. He received with Claude Lorius the CNRS gold medal, the highest French scientific award. Jean Jouzel believes In the power of education and the opportunities which are opened to people who get access to education., impacting each individual’s fate, like his own.

“Being a descendent of a family of farmers since generations, I thoroughly enjoyed the education that was given to me from primary school to university and later on towards a PhD, who in turn opened up upon an exciting research career. My life is filled by these years of hard studies but they were also very happy. I wish that all young people could benefit from the same huge opportunities that I got, however, I know that many will not get it without a boost and adaptive aids. The actions conducted by the Nobel Academy in the field of higher education are likely to motivate young people and allow them to move forward”. (Jean Jouzel, co –Peace Nobel Prize Winner in 2009 with Al Gore)

Make sure to take your first action today towards the future you aspire and contact our programme advisors to support you choosing the right education for this journey.